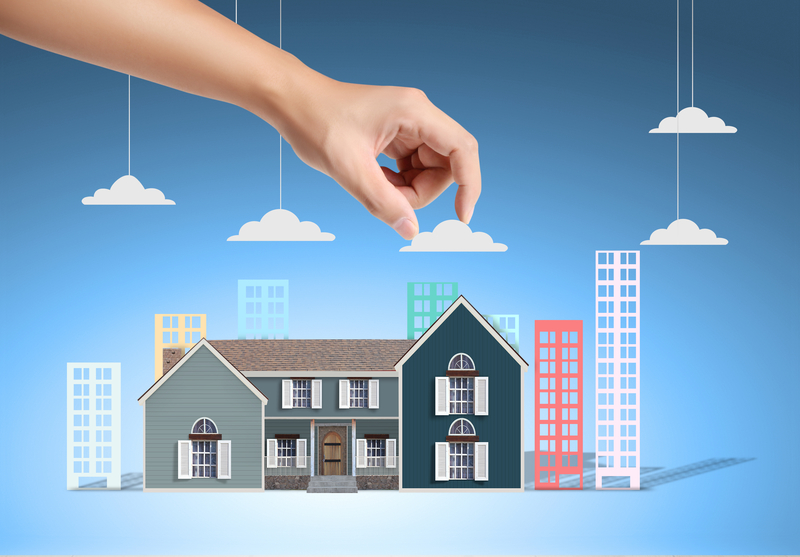 In a recent article for The Australian, noted demographer Bernard Salt provided a different take on the shifting face of Australia’s cities, and emerging ‘areas of note’ for investment and development potential.

Down the line…
Salt proclaims four key locations as “next tier” cities, being the Gold Coast, Newcastle, Canberra and the Sunshine Coast. All of these locations are experiencing significant demographic transitions, driven by changing population growth and composition, which Salt says opens up numerous opportunities to those who can see it all occurring.

Notably says Salt; the three largest of these cities are, “inextricably linked to capital cities to the extent that it could be argued they are functionally co-dependent.

“Intercity commuter flows connect the two Queensland ‘coasts’ with Brisbane. Newcastle is less connected to Sydney by commuting but the city’s growth nevertheless benefits from a Sydney overspill factor: people escaping the pressures and costs of Sydney living. Canberra, it could be argued, is a cultural outpost of Sydney and Melbourne.”

Bigger and better…
Collectively, all four cities account for around 8 per cent of the total population in Australia or close to 1.8 million people. And all are currently in a state of re-establishment, after experiencing various economic and industry modifications, and now reaping the benefits of renewed interest in ‘close-to-city-sea-change’ locations as places to establish a more permanent lifestyle for commuter residents. 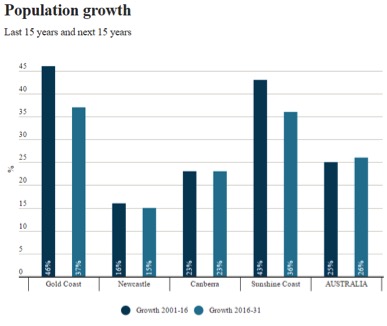 Salt points out that while all four of these cities might be linked by scale, each one has undergone its own unique evolution over time.

The Gold and Sunshine Coasts were largely built on the back of last century’s sea change craze (obviously); where people wanted a retirement type atmosphere by the beach, with easy CBD access (to Brisbane).

Conversely, rather than happening due to a coincidental (?) lifestyle shift, Canberra was a city planned carefully and concisely to serve the purpose of acting as our nation’s political heartland.

“The city has no equivalent of Toorak or Point Piper but, then, neither does it have struggle suburbs,” notes Salt.

“Yes, there are variations but not the extremes of the free-enterprise capitals. The city is measured; its people are measured; growth is considered and directed. This decade and into the next it is Gungahlin and perhaps some redevelopment opportunities in North and South Canberra.”

Of these cities, strong population growth has been most consistent on the Gold Coast, with almost 14,000 new people flocking to its sunny shores in the 12 months to June last year, and close to 20,000 relocating to the holidaymaker’s Mecca at the peak of the sea-change phenomenon more than a decade ago.

Salt says that with almost 6000 new people moving to the Sunshine Coast each year, along with 5000 to Canberra and 4000 to Newcastle, all four of these cities should be taken seriously as places where opportunities await the astute developer.

“On these figures the outlook for the Gold Coast is positive. And generally I would concur. The Gold Coast slumped after the global financial crisis and is reawakening only now, stimulated by infrastructure spending and the coming of the Commonwealth Games.”

He adds that with a further wave of baby boomers soon looking to relocate from their inner city homes near the office, to a more relaxed lifestyle by the beach, prospects for growth in the next decade are looking increasingly optimistic for the Gold and Sunshine Coasts.

He believes these cities are well placed for future development and expansion to accommodate growing populations and as such, the potential for interesting investment opportunities.

While Salt concedes that forecasts suggest Canberra will also experience its fair share of population growth during the next 15 years, with a projected increase of 93,000 new residents over that time, he has a harder time working out the whys.

“I can see the logic behind escalating rates of growth on the Gold Coast and Sunshine Coast. I cannot see the driver behind faster growth in Canberra and especially when there must be restraint on growth in the public service,” he says.

Leading by example
One of the most intriguing tales of two cities…or one in this case (but that doesn’t have quite the same ring)…is in Newcastle. Built on the foundations of a local steel industry and then later the coal industry, the town has been forced to reinvent itself more than once since the 1999 closure of the BHP steel mill.

Salt suggests Newcastle’s “reimagination” to more of a lifestyle destination should provide hope for towns currently experiencing similar industrial transitions that bring “profound economic and social change such as Geelong, Wollongong, Townsville and perhaps even Whyalla and the Latrobe Valley.”

Newcastle, according to the demographer, appears to be the most stable of these ‘next tier’ cities when it comes to steady population growth, with 63,000 new residents settling there over the last 15 years and a further 65,000 expected to move in over the next 15 years.

“My view here is that the bigger, the meaner, the more congested, the less tolerable Sydney becomes, the greater the driver for overspill growth into Newcastle.”

Looking at the numbers
Salt says investors would do well to explore population projections for Australia’s various cities soon to be released in the upcoming 2016 Census data and look at them not as absolute markers, but as the “anticipated shift in the momentum of growth.”

He challenges investors to consider whether the market you’re operating in is rising or falling?

“Because I say that the markets are rising on the Gold Coast, the Sunshine Coast and Newcastle but have plateaued in Canberra.

“Making strategic decisions about which markets to enter and how much to invest are important. Get it wrong and you are locked into marginal markets. Get it right and success is more easily attained and sustained. Projections are important but they must be tempered — filtered, even — by a common sense evaluation of the drivers of demand.”

Salt says while property is a good business to be in given that Australia is a growing nation, already experiencing obvious accommodation supply constraints, why just aim for ‘good’ when you can do your homework and uncover ‘the best’ the markets have to offer?

“Consider the 10 to 15-year outlook for cities and markets you are contemplating entering,” he counsels. And then go for the ones with the most promise!