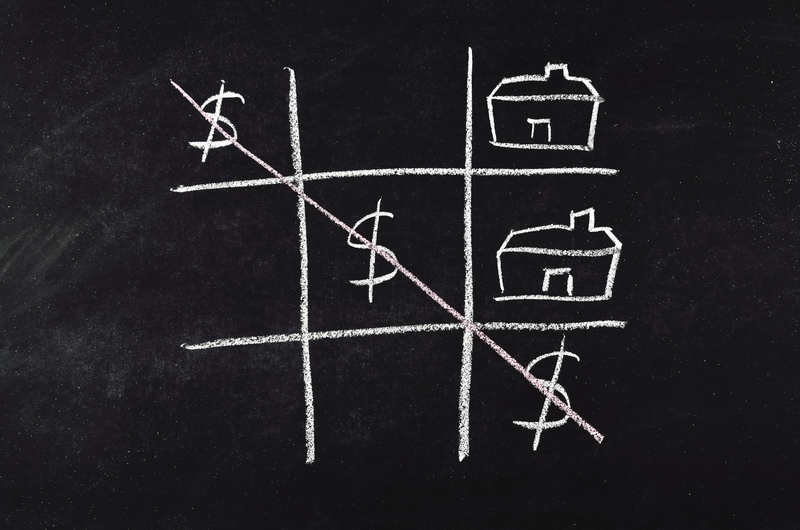 Low interest rates are leading to an overseas and local investor driven property bubble, along with an unprecedented apartment construction boom. However, an ongoing housing shortage, coupled with continuing strong buyer demand continues to place upward pressure on dwelling prices.

The bottom line though, is one that encapsulates all of the above and more. It’s the definitive economic, social and political dilemma of the day. And it just won’t go away. It’s the affordability crisis plaguing young Australians.

If any of the above highlighted words seem familiar to you, it’s entirely understandable. These terms are dominating digital and print news headlines, both here and across countries with similar financial and political systems to our own.

What’s interesting about the affordability debate is that there are two very distinct sides arguing black and white theories, in what is surely a murky grey area, given regulators and policymakers are struggling to make sense of it all.

And the big question…are our pollies listening to the ongoing conjecture, or planning to do anything about it? If indeed, there is an ‘it’ to do something about?

So maybe we should start there and pose the question; Has Australia’s housing become unaffordable for today’s first home buyers, compared to when their parents entered the property market some two to four decades ago?

Ladies and gentlemen…arguing for the affirmative

In a recent piece written for The Australian, KPMG demographer Bernard Salt argued that younger generations are not merely a ‘bunch of over-privileged whiners’, as their detractors suggest.

“The best measure of housing affordability at a global level is a series of reports by the US-based consultancy Demographia,” says Salt.

“The 2017 report released in January looked at 92 cities with more than one million residents across nine countries comparing the median cost of housing with median household income.

“Sydney ranks second on this list after Hong Kong with a median multiple of 12.2, meaning that it takes more than 12 years of household income to buy a median house in the harbour city.”

No home buying Sydney-sider would be ruffled by the revelation of their hometown’s number two ranking on the Demographia list.

But we also have Melbourne coming in sixth, with a median multiple of 9.5, and Adelaide and Perth get a mention among the Top 20 cities, “commanding median multiples of between 6.1 and 6.6,” says Salt.

In dollar terms, this translates to a median house price of $1.077 million in the Harbour City, while the average income is just $88,000.

Working our way back then, if the argument is that housing’s becoming increasingly unaffordable in our major cities, what was the median multiple discrepancy five years ago? For Sydney, the answer is 9.2 and for Melbourne, 8.4.

Again, Salt provides the dollar values to put that in perspective; “In the last five years household income in Sydney has increased by $9,000 while median house prices have increased by $439,000.

“House prices are sprinting away from Middle Australia in Sydney and to a lesser extent in Melbourne and in other capitals.”

Salt initially suggests that perhaps we should simply get used to what might be ‘the new normal’.

“As concerning as this is for our nation, and especially the capital cities that the Australian economy, there is another aspect to the Demographia dataset that I find compelling. Maybe Sydney and Melbourne are simply joining the ranks of elite global cities that have always struggled to deliver affordable housing?”

But he quickly debunks this notion, with a comparison of London, where the housing multiple is less than Sydney and Melbourne’s at 8.5 and New York, which is more affordable than Adelaide at 5.7. What about the bustling Japanese capital of Tokyo then?

“Let’s compare affordability in Australia’s biggest cities with the Japanese behemoth (Tokyo), which has 38 million residents spread across an area twice the footprint of urban Sydney,” says Salt.

“The median house price in Tokyo-Yokohama is 32 million yen ($379,000) whereas average household income is seven million yen ($81,000), which delivers a housing multiple of 4.7. How is it that Tokyo can deliver housing affordability but Sydney cannot?”

REA chief economist Nerida Conisbee, reports in a recent interview with The Urban Developer that the flow on effect of Sydney’s affordability barrier has seen the NSW Central Coast emerge as a new regional retail, commercial and employment hub.

“The Central Coast is overwhelmingly coming up as the area outside of Sydney that is quickest selling, with certain suburbs within the region registering the fastest movement in popularity,” she notes from REA data.

Not only is the region enjoying increased appeal due to the easy, direct commute available via public transport to the Sydney CBD, but also because you can still buy a four bed, two bathroom, double garage home “well below a million dollars, which is extraordinary value compared to inner Sydney,” says Connisbee.

While Salt acknowledges that there are still relatively affordable options for first homebuyers in areas further afield from our big cities, he uses the below pictorial to demonstrate exactly how much further out younger people are expected to commute from their CBD workplaces. 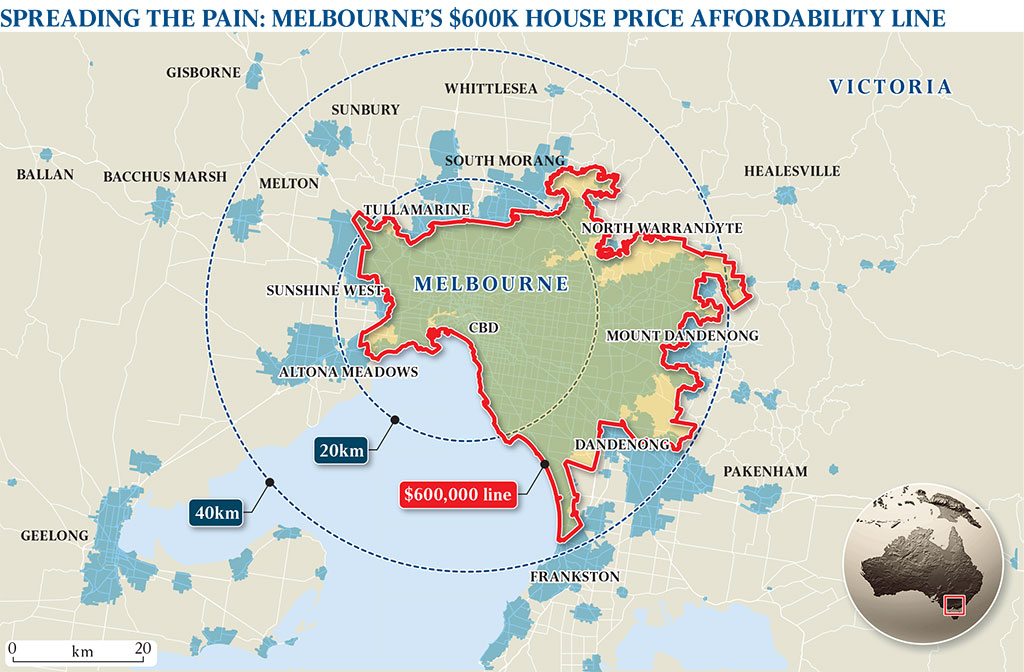 Salt explains that the map highlights “Melbourne’s affordability line; it delineates median house prices above and below the $600,000-mark. Housing affordability as defined starts at Thomastown ($478,000) to the north, St Albans ($519,000) to the west and at Altona Meadows ($523,000) to the southwest.

“But this also means that housing unaffordability in Melbourne (with the median exceeding $600,000) extends across 60 unrelenting kilometres between Caroline Springs in the west and Belgrave in the east.”

And Sydneysiders are expected to commute even longer distances for affordable housing options.

Conisbee acknowledges that, “Lack of affordable housing is an economic problem. An economy can’t run with only very high-income earners.

“You also need people on more moderate incomes such as nurses, teachers and trades to support hospitals, schools and building. Sydney is too expensive and it makes it very difficult for people on average salaries to buy and rent.”

She adds that while it may be a “throw away comment”, since former premiere Bob Carr declared Sydney ‘closed’ to developers in the year 2000 there have been…”very low development levels in Sydney with regard to pretty much every single aspect of commercial and residential property.”

Not to mention the incessant planning issues and red tape that came with too many local council cooks all toiling over the city’s infrastructure planning, which have since been thankfully amalgamated.

But the question remains…exactly how do you find the solution to this multi-faceted affordability conundrum faced by future generations?

So, is there a solution?

Salt says a good place to start when addressing Australia’s big city affordability barrier is through a comparison of planning policies with other cities in the world that still offer entry level options for homebuyers.

“Is this the result of housing policies that we can copy or adapt? Or is our inability to deliver affordable housing a product of greater societal and planning issues unique to Australia? The former promises a quick solution; the latter would require time — decades, even — to bring about a favourable outcome.”

Either way, Salt says the housing affordability issue is not going to get any better until positive action is taken.

“To have an entire generation affected by a shift in the social contract of reasonable access to capital-city housing diminishes our nation’s social cohesion. This is an issue that will beset politicians of all persuasions for years to come.”