Where Is Australia’s Population Growth Going?

Earlier this year, Australia enjoyed the distinction of logging its 103rd quarter without experiencing a technical recession. Representing the longest period of uninterrupted growth ever experienced by a developed nation…an impressive feat indeed.

Many celebrated the news as evidence of sound economic management, particularly by our politicians. Industrial relations reforms and the floating of the Aussie dollar were also hurrahed as good strategic moves for our fiscal fortitude, even as other nations crumbled under the weight of the 2008 GFC.

Others spoke of China’s instrumental contribution, with its own economic boom creating a huge demand for Aussie grown natural resources.

While there may have been some sound economic manoeuvres made along the way, the real hero of the day when it comes to underpinning our economy so darn effectively is actually…us!

Australia’s population growth, particularly over the past decade, has arguably played the most important role in powering our economy forward in the face of other global fiscal bubbles bursting.

This chart clearly depicts population growth as the economic hero of the day, with our numbers increasing by an impressive 41.1% since 1991, or 7.1 million residents. 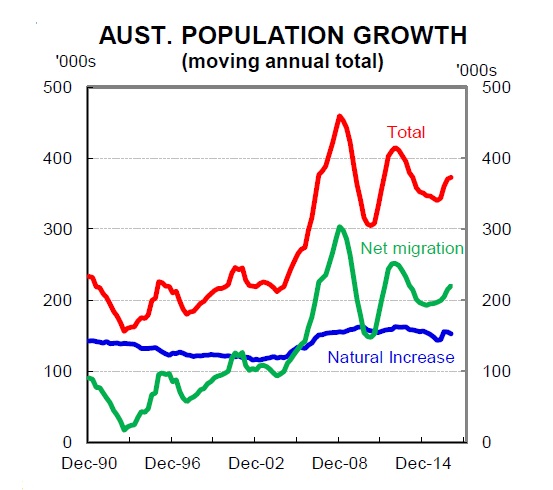 Of course more of us translates to more consumer demand and a flourishing headline GDP.

According to a UBS analysis from earlier this year, population growth was responsible for two-thirds of our total economic growth in the post-GFC period, adding on average 1.6% each year.

Here comes the “but”…

Strong population growth also brings its own set of economic challenges, which we really cannot ignore if we want to continue prospering in the face of global adversity.

Consider employment for instance. Jobs growth hasn’t exactly aligned with population growth, when you consider that we’re increasing by over 350,000 new people per annum, meaning an additional 200,000 jobs need to be created each year.

Sure, the labour market has started to pick up again in recent times after a notable lull off the back of a beaten up resources boom, but aside from the last quarter or so, things have been agonisingly slow.

Senior economist with the Commonwealth Bank Gareth Aird explained in a Business Insider report, “Labour market underutilisation is high in Australia because the supply of labour has exceeded the demand for workers.

“If the economy is not generating enough jobs to cover the lift in the population then the labour market slack will increase, which keeps a lid on wages growth regardless of the rate of productivity growth,” he said.

Although our unemployment figures have fallen recently to the lowest levels since early 2013, ‘underemployment’ – or those who would like more work to be able to pay their bills! – is currently at 8.8% and underutilisation (underemployment plus unemployment) is at 14.4%; close to the highest recorded levels since the late 1990s.

The abundant labour market, coupled with sluggish employment growth, has also contributed to snail’s pace wages growth, which is now running at its slowest pace since the 1990s recession. 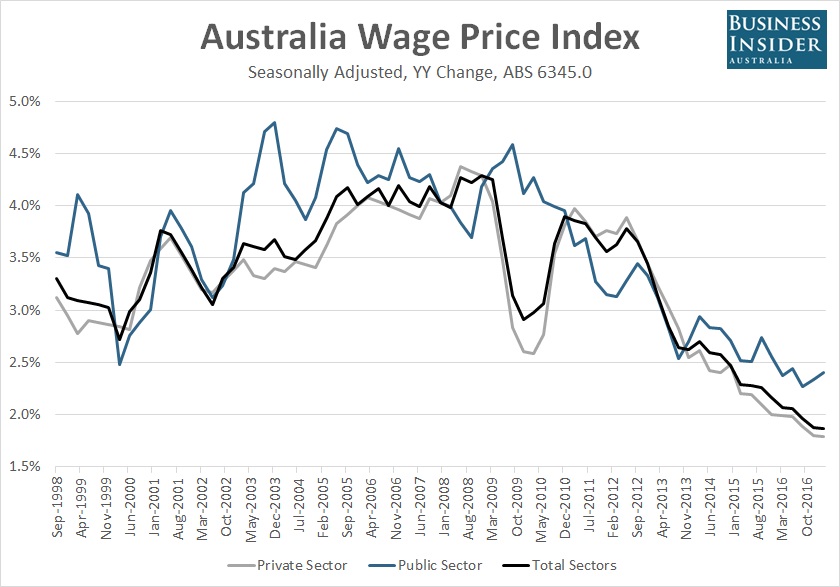 Aird says this is adding to the financial pressures faced by households, with the steady deceleration of employee earnings reflected in weaker consumer sentiment and spending.

The cost of living

Nowhere is the burden of population pressures in the face of a sluggish labour market been more evident than in the housing sector – whether you’re a buyer or a tenant.

CoreLogic data shows that property prices have doubled in both Sydney and Melbourne since early 2009, where population growth has easily outstripped any other capital.

This means those who already own property and have equity in housing assets, are at a distinct advantage over those yet to break into the real estate market.

“The latter are generally younger in age and are now faced with the task of needing to save a much greater share of their income for a deposit.”

Our rapid population growth is also putting pressure on existing infrastructure, at a time when public investment at all levels of government is insufficient to say the least.

While a growing population has its perks, it’s obvious that without effective measures implemented to ensure everything else keeps pace, we could be facing too much of a good thing.

“Per capita measures of the economy suggest that growth in living standards has stagnated and for some sections of the resident population, in particular younger people, it has gone backwards,” says Aird.

“The issues point to the need for a comprehensive and open discussion around the policy direction Australia is taking.”