Where to find affordable investment opportunities as markets heat up

A so called avalanche of ‘auto-pilot investors’; mums and dads still reluctant from past share market casualties being enticed into real estate by the current low interest rate environment, are causing a mini-boom of sorts around some property hubs across inner city Sydney, Brisbane and Melbourne.

Despite many expecting interest rates to rise in coming months, consumer confidence remains consistently high when it comes to residential markets and the belief that house prices will continue on an upward trajectory.

The August Westpac-Melbourne Institute House Price Expectations Index was up by 20.6% since the May Federal Budget announcement, even though 63% of consumers anticipate mortgage rates to increase in 12 months time. In other words, more people are feeling all warm and fuzzy about the financial security offered by Aussie bricks and mortar.

While some commentators suggest this could have negative long-term ramifications for the property sector, not to mention the expected soar in future mortgage defaults when rates inevitably start to move back up, the question for investors is whether they have missed the latest buying boat.

The heat is on

It’s been reported that New South Wales’ real estate investors now make up 50% of the Australian property investor market. This desire to add Sydney dwellings to their portfolios could go some way in explaining recent auction price blowouts across the Harbour City.

An August Property Observer update reported an average 11% difference in the advertised pre-auction guide price for Sydney last month compared to the eventual sale price achieved, with estimates missing the mark by between 3 to 19% plus, on every occasion where property sold at the fall of hammer.

Above average clearance rates in most capital city areas are indicative of consistent buyer interest week in, week out and the International Monetary Fund (IMF) recently reported that Australia had the third most overvalued property market at the end of last year, based on real estate debt to income ratios (right up there with New Zealand and Canada).

While economic boffins argue the whys and wherefores of our unswerving local housing sector – with many scapegoating negative gearing policies, which they claim greatly favour local investors’ needs over outpriced first homebuyers’ – those in the market for an addition to their real estate retirement fund are finding it increasingly difficult to uncover a ‘good deal’. So are they still out there?

The good news is; there are always buying opportunities in any given market. You just need to be realistic about where the market is placed and right now that means competition is fierce.

Obviously, if you have your heart set on popular Sydney suburbs, you can anticipate potentially spending 10% or more on top of the advertised guide, to secure property at auction.

Thanks to statistical and reporting companies like RP Data though, today’s investors have the capacity to find better buying opportunities from right in front of their computer screen.

Last month, RP Data released a list of the most affordable areas within 10 kilometres of each capital city CBD, including the five most affordable suburbs for units and houses. Research analyst Cameron Kusher says investors are likely to find the results somewhat surprising, given the consistent supply/demand imbalance across our inner city neighbourhoods maintaining upward pressure on already inflated price tags.

He does admit though, while prices might be comparatively lower across some inner city areas of Sydney and Melbourne, entry points are still on the high side of affordable, with units offering a good buying alternative.

Some of the list’s cheaper areas are notoriously considered the ‘poorer cousins’ of each respective city, however most are undergoing urban renewal and gentrification programs that will see them maintain long term favour with a new wave of homeowners and tenants.

Kusher advises investors to target those more affordable areas that will generate renewed interest due to, not only lower home buying prospects, but also features such as “quality public transport connections, abundant retail and social amenity, quality schools and medical amenity.”

As with any potential property investment, it’s important that investors do their research and understand the long-term capital growth history of any given area before looking to secure an asset for their portfolio. Equally, you need to crunch the numbers and ensure you won’t be a future statistic when the Reserve Bank breaks its prolonged low cash rate hiatus and those repayments that look incredibly attractive right now start to slowly rise.

In the meantime, here is RP Data’s city-by-city breakdown of affordable property investment prospects. Over coming issues, we will select some of these areas for more in-depth suburb profiles, to assist with your investment analysis. 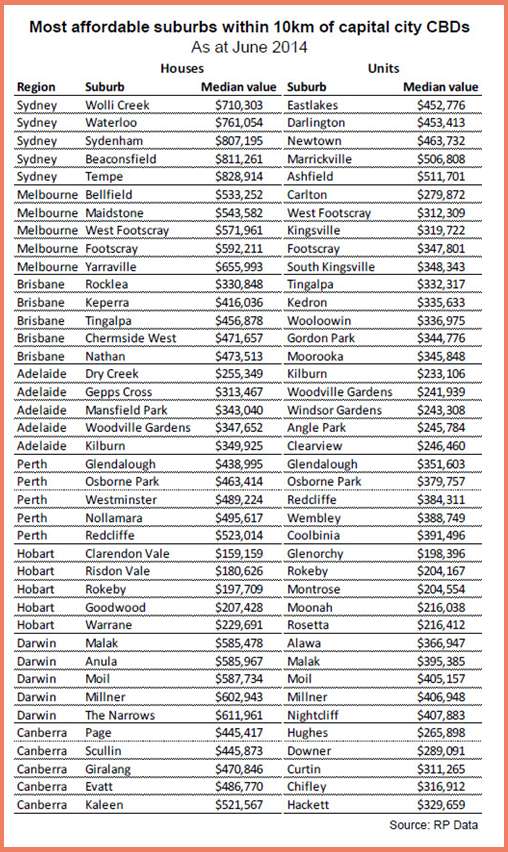