Bubble, Bubble, Toil And Trouble? Will Housing Market Speculation End With A Bang…Or A Fizzle? 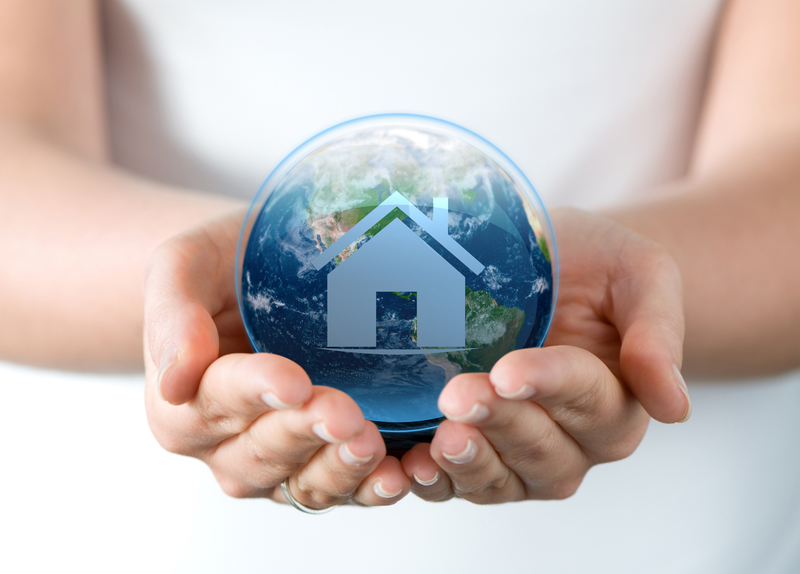 I don’t know about you, but I’m starting to think the same guy who wrote Game of Thrones is responsible for penning the destiny of Australia’s collective ‘property market’, if such a thing exists…apparently it does when you talk housing BUBBLES!

Much like the seemingly enthralling, fantastical soap opera (I’ve never watched it. No, really.), that always leaves you on the edge of your seat (so I’m told by avid fans), real estate is the constant subject of speculative drama at its finest.

What do I mean by ‘speculative’ drama? Well…it’s the kind that promises something might happen to one of your favourite characters in order to get you emotionally invested in their story, and keep you coming back for more. Somehow though, said characters always manage to escape each one of his or her respective near death experiences, relatively intact…albeit a little traumatised.

All references to stories that engender fanatical followings aside, what I’m so obviously talking about here is the perpetual ‘will it or won’t it’ question that’s plagued our local property markets for decades now.

Or more specifically, is there a property bubble and when might it implode?

Over the many years I’ve worked in this industry, housing bubbles have been incessantly predicted, picked apart and pondered. Bubble talk is an integral aspect of any market cycle when you think about it…because the mundanely dependable ups and downs make for a far more interesting read when people are on the edge of their seats.

Particularly when those people are actively participating in the story and helping to shape it through their buying behaviour. And yet again, at a time when there’s so much economic and political uncertainty and upheaval throughout the world, we find ourselves firmly in the midst of the housing bubble hype.

The ‘right now’ bubble
Real estate bubbles have been blown out of all proportion for a long time now. Historically speaking, most ‘bubbles’ have turned out to be fairly benign when it comes to the ‘big picture’ perspective on property values, which have consistently risen by 7.25% per annum on average for the past thirty years, according to data from the Reserve Bank.

Sure, there have been some fiscal casualties of more speculative real estate markets and niche housing asset types…investors in heavily resource sector reliant, regional towns for instance.

Savvy investors however, who understand what makes for longevity in a property portfolio, are still going strong today, despite the little bumps and ‘bubbles’ along the way. Historically speaking most alleged ‘bubbles’ haven’t been too alarming for the more strategic property investors among us.

Today though, we’re living in a very different world. And a very different economic context. So should we be taking this latest possible ‘boy who cried wolf’ bubble scenario a little more seriously?

A rundown of expert opinion
There’s no shortage of opinions and conjecture floating around the real estate ether right now. At a broader economic level, the Reserve Bank claims China’s growing debt and a property market downturn are the two biggest risks to Australia’s future financial stability.

A local new apartment over-supply across our major inner cities, weakening demand for commercial real estate and mining-related bad debts, have all been flagged by the central bank as potentially significant risk areas for lenders. But the real fly in the ointment seems to be China.

“The interaction between rising debt, slower economic growth and excess capacity in some areas is raising the chance of widespread loan defaults and economic disruption,” the bank’s Financial Stability Review says of China.

Given China is now this country’s largest trading partner; analysts are concerned the manufacturing giant’s slowing economy and growing internal debt could reduce sales revenue and profits for companies here at home.

The flow on effect would likely be felt by the financial services sector, with a possible increase in delinquent business loan repayments to the local banks.

As for housing bubble speculation, it seems a niche real estate sector has once again been highlighted as the only potential problem child of Australia’s property markets.

While the regulator is less worried about the overall stability of house prices now than it was six months ago, there’s still a sense of uncertainty surrounding the runaway, high-density construction sector.

Another day older and deeper in debt…
Alongside the fact that we’re currently seeing the largest apartment construction boom on record, other commentators are citing things like overly inflated house prices and globally comparable high levels of household debt as a potentially damaging cocktail that could lead to a house price collapse.

How many times have we heard about the “debt-fuelled bubble” that’s set to “pop in spectacular fashion”…over the last two years? Err…insert awkward cough…still waiting!

There’s no denying property prices are expensive here at home. According to the 2016 Demographia Housing Affordability Survey the median multiple of house prices in cities over 1 million people to household income is 6.4 times in Australia, versus 3.7 in the US and 4.6 in the UK.

In Sydney it’s 12.2 times and in Melbourne it’s 9.7 times. The ratios of house price to incomes and rents are at the high end of OECD countries and have been there since 2003.

And yes…logically as house prices have surged, so to has our average household debt to income ratio, with Australia jumping from the lower end of OECD countries 25 years ago, to now sitting up around the top.

AMP chief economist Shane Oliver demonstrates the current (and long term) deviation of house price to income ratio as a percentage in the following graph, together with the change in household debt as % annual household disposable income between 1990 and 2015.

Both are clearly increasing rapidly, particularly from the early 2000s, when changes to the tax treatment on Australian housing were introduced. 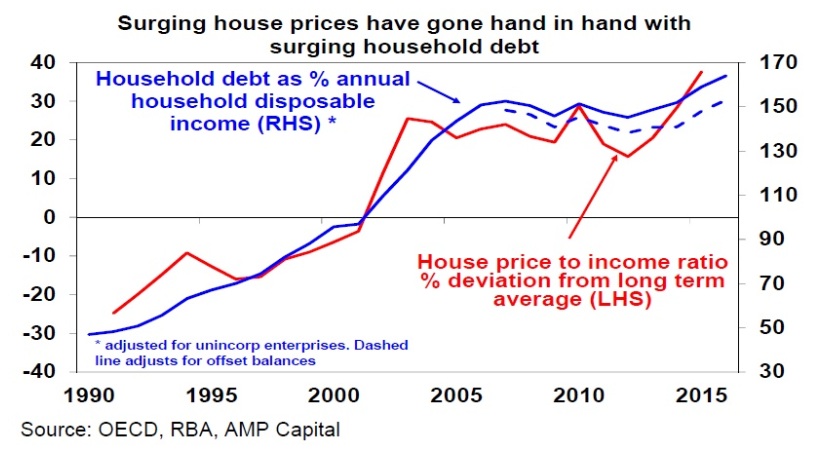 Oliver says this increased level of debt, aligned with rising house prices, could potentially lead to a collapse in house values of 20 per cent or more, if one of the three things were to happen:

1. A recession that in turn caused a spike in unemployment would obviously create debt-servicing issues for many households who are already struggling.
2. An interest rate hike could tip households with higher debt exposure and sensitivity into danger territory.
3. A property oversupply caused by the continuation of our current construction boom.

He adds however, that the likelihood of any one of the three above catalysts actually sending property prices plummeting is pretty slim. Even though a recession would be the most plausible trigger, depending on which way the Chinese economy goes.

As with many other experts who are more predisposed to factual analysis over speculative drama, Oliver believes while our recent breakneck pace of housing price growth will inevitably slow and possibly reverse, no significant crash is on the cards.

“Nationwide price falls are unlikely until the RBA starts to raise interest rates again, and this is unlikely before 2018 at which point we are likely to see a 5% or so pullback in property prices, as was seen in the 2009 and 2011 down cycles,” he says.

Oliver adds that, “anything worse would likely require much higher interest rates or recession, both of which are unlikely”.

Of course that doesn’t mean the more speculative apartment sector won’t be in for a relatively dramatic correction, with Oliver warning prices could drop by as much as 15 to 20 per cent for new unit stock, as investor interest wanes due to falling yields.

He also reminds us that general ‘housing market’ conjecture is a dangerous pastime for property investors, suggesting that “Sydney and Melbourne, having seen the biggest gains, are more at risk and so could fall 5-10% around 2018”.

Investors take note…
Remember how I said earlier that savvy property investors who adopted a well-planned strategy have successfully navigated their way through a number of property bubble scares?

These are people who can recognise an opportunity, analyse the potential outcomes and then act according to facts and figures. Note, they are not speculators as a rule. They’re far too careful and considered for that.

Every location and property should be assessed according to its individual merit, including its capital gains performance record over time…and importantly, over a number of cycles that have involved ‘property bubble’ talk.

At this stage of the cycle, as with any time really, the key message for investors is to know your stuff. Research and real estate go hand in hand. And remember, when others are running scared due to property bubble hype, clever investors are watching for an opportunity to make money.