Inflation & interest rates – where to from here?

Speculation abounds as to what the Reserve Bank will do when they convene next week to make a decision on interest rates. Up, down or nowhere for the fifteenth consecutive month in a row?

However, some analysts suggest that a one-dimensional assessment of inflation is missing the mark, and that the RBA’s monthly interest rate deliberations are becoming increasingly complex as our domestic fortunes become more intricately enmeshed with the global economy.

The issue the RBA increasingly faces is a divergence between the inflationary rate of tradable versus non-tradable goods. This is particularly evident over the past two decades, with Australia’s labour force and domestic service provision becoming more diverse at the same time as overseas markets have become more accessible. 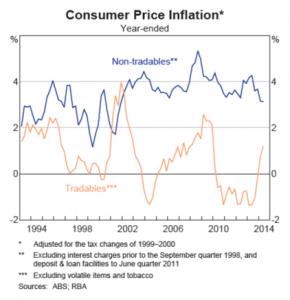 The above graph demonstrates that inflation has been notably more stable and higher on non-tradables than tradables over the last twenty years, although the cyclical variations of both are relatively comparable.

While the official inflation target for the RBA is between 2 and 3%, inflation on non-tradable items has increased at a rate of 3.7% per annum over the past decade.

Australia has been enjoying the positive effects of an unprecedented, once in a lifetime terms of trade boom, which put upward pressure on the exchange rate, and in turn lowered the price of imported, manufactured goods.

This enhanced the spending power of Australian households and motivated consumers to pay more for domestic goods and services.

Experts suggest that as the terms of trade boom begins to unwind, which our stabilizing exchange rate would suggest is now occurring, inflation on tradable goods may moderate in the short-term, before increasing significantly over the next couple of years, particularly if the Aussie dollar drops to around US80c.

In turn, these lower terms of trade would weigh on domestic wages and stifle the buying power of Aussie households, a process potentially spurred on by rising unemployment.

Analysts suggest this could all represent a conundrum for the RBA, with the distinct possibility that inflation may surge in the short-term due to the exchange rate, while growth remains below trend.

The big question then is, will the RBA step in and attempt to correct things with an interest rate rise? Will they risk stalling domestic growth in a bid to curb imported inflation?

Watch this space for a special Trilogy Report next Tuesday, when we share the RBA’s October interest rate decision and explore how the central bank is working with APRA (Australian Prudential Regulation Authority) to help put the brakes on Australia’s property sector.