Is the latest talk of a property bubble just a lot of hot air?

‘What goes around comes around,’ as they say and historically speaking, the cyclical nature of all the rhetoric surrounding our property markets is no exception.

With every new ascent and descent in buyer activity and housing values, a fresh wave of media induced hysteria seems to ensue. As is usually the case in an ‘upswing’, such as the one we are currently experiencing, talk invariably starts of property bubbles and an impending market implosion.

While there have been extreme peaks and troughs across various residential real estate cycles, the fact is if you chart the linear progression of ‘investment grade’ properties over time, you’ll find that most of the growth in this type of asset shows a fairly consistent and steady, upward trajectory.

It’s understandable that the negative press surrounding our property markets easily spooks some people. Statistics are trotted out to support all the ‘news’ (read noise) intended to sell newspapers, foretelling of affordability crises, out of control investor activity and price growth across already over-boiling markets. Naturally, fear takes hold and instigates itself into the minds of the masses, which usually leads to a self-fulfilling prophetic ‘downturn’.

But the fact is, all of the ups and downs are not necessarily massive swings in values, but more like natural market corrections taken way out of context and proportion. What goes up must eventually come down, and vice versa.

This was made evident in a report from RP Data earlier this year, which provided a different glimpse into recent market price adjustments when it considered inflation adjusted home values.

The July RP Data-Rismark Home Value Index showed that at a headline level, combined capital city values increased by 10.1% over the 2013/14 financial year. However, if you account for natural inflation (recorded at 3% for the same period), this reduces ‘real terms’ growth to just over 7%.

The report also provided the following compelling table, with data indicating that the current alleged burgeoning property bubble, is no more than an upward correction following general market declines over the two years prior to 2012. 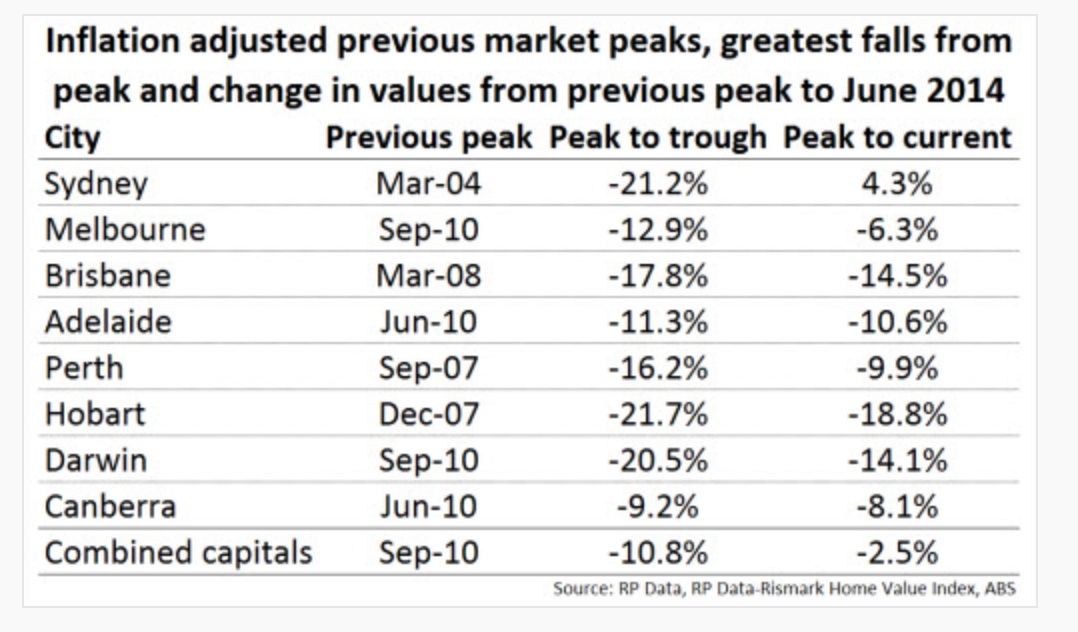 When we look at the above figures, all the current talk of bubbles and affordability issues appears to be somewhat overcooked, given the only city that seems to have caught up to and surpassed its previous recorded market peak (all the way back in March 2004) is Sydney.

And when you put this in context, Sydney had a LOT more catching up to do than some of its capital city counterparts, whose last recorded peaks were all between 2007 and 2010.

The take home message for property investors is to avoid reactionary moves on the back of all the market ‘to do’. Planning is imperative when you decide to secure your financial future with any type of investment vehicle, and when we start talking more illiquid type assets, such as residential housing, you’re your level of forward planning will absolutely determine your success.

The creation and subsequent implementation of a sound investment strategy will ensure you remain on the right path. In fact, investment planning is so critical to ensuring you meet your wealth creation objectives, I have included another article this week outlining 6 important investment strategies that I believe EVERY Australian child should learn.

As Warren Buffet says, political and economic forecasts (particularly the ones debated in mainstream media) “are an expensive distraction for many investors”.

Remember, most market noise consists of generalized facts at best and over-rated opinions at worst. As an investor, it’s all about the specifics, especially when it comes to selecting only investment grade assets.