Residential real estate is certainly one of the more interesting commodities of trade in our modern age.

Where once the dwellings we lived in were simply intended to fulfil a basic human need for shelter, property has now become entrenched in the world of money and finance. 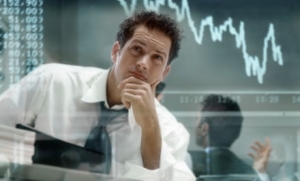 As such, the housing sector operates within an overall economic schemata or system, aligned with various fundamentals, and is used to maintain or alter a particular fiscal course that different countries or ‘markets’ happen to be on at any given time.

Sometimes monetary and political policy encourages consumers to take on debt in order to acquire dwellings as homes or investments. Property prices rise in line with the demand trajectory and various industries benefit off the back of a so-called housing boom.

Then, when things get a little too heated and a so-called ‘housing bubble’ begins to emerge, interest rates rise and suddenly we’re not so keen on leveraging into bricks and mortar. Demand slows and a ‘natural’ market correction occurs.

Currently there’s an awful lot of press around a property bubble here in Australia. Many commentators suggest our house prices are over-inflated – often citing the red hot Sydney market (in isolation) as a ‘go to’ example.

There’s no point denying that some sectors are showing signs of unsustainable growth, simply due to the fact that if the current breakneck pace continued buyers wouldn’t be able to afford a toilet, let alone an entire house in certain neighbourhoods.

A recent tongue in cheek SBS report around the market every media outlet loves to hate right now – yes, it’s Sydney! – suggests prices across the Harbour City’s inner suburbs have exceeded the amount of money it’s morally right to own.

And when the median house price starts creeping toward the $1 million mark, it’s difficult to deny that this basic need for shelter has become a luxury item that most middle-income earners can only dream of (pardon the obvious reference).

Is the housing bubble a calculated risk?

Some commentators, including high profile industry heavyweight Christopher Joye, have proposed that the Reserve Bank is purposefully stimulating the housing sector with unprecedented favourable monetary policy in the form of ongoing low interest rates.

Perhaps a property bubble is considered an acceptable risk when faced with a consistent stream of lackluster business and consumer sentiment, and an economy trying to find its feet as the resources boom loses its effervescence.

With Chinese demand for Australian resources continuing to decline from those heady boom time peaks, the mining sector has lost it status as Australia’s favourite fiscal child.

Now everyone wants a piece of bricks and mortar, including many Chinese investors, making housing the go-to commodity that’s keeping Aussie money moving.

Ask most local experts and they’ll laugh off the notion of any serious impending market correction.

A recent report in The Weekend Australian examined house price data from as far back as 1965 to demonstrate that no bone jarring value crash has occurred here for at least the last 50 years. 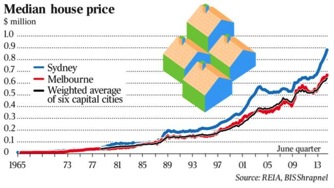 In fact the largest correction occurred in…you guessed it…Sydney(!), when values fell by 9 per cent between March 2004 and December 2005.

But these pretty graphs and numbers don’t seem to quell the enthusiasm of overseas bubble enthusiasts, with the likes of Harry Dent in the US and Jeremy Lawson (chief economist at British fund management giant Standard Life), insisting that an impending decline of 30 to 50 per cent is looming.

One of the biggest issues with all of these mixed messages and the sources from which they originate, is who should you actually believe?

It’s difficult to give credence to alarmist, offshore predictions when you know that much of the assumptions around price corrections they’re making are based heavily on comparisons with what’s happened/is happening overseas.

China is currently said to be on the brink of a housing collapse due to an oversupply in the region of 20 per cent plus across some of the country’s major cities, which has caused median prices to fall steadily for eight consecutive months.

Of course this has led alarmists to the conclusion that the Chinese housing bubble will cause a ripple effect in our own real estate sector and pop our alleged property bubble too.

Still, others argue that China’s market is stabilizing, but not rocketing back, with subtle falls in the region of 0.4 to 1 per cent.

Those relying on common sense rather than property panic attacks, point out that a lacklustre Chinese housing sector will simply encourage more foreign investment from our Asian neighbours in…wait for it…Australian housing.

In other words, rather than bursting our so-called ‘housing bubble’, it’s likely that Chinese buyers will help to further underpin prices into the future.

Then there’s Canada. Much like we saw here in Australia, the Canadian government used their local housing sector to dig itself out of recession after the 2008 GFC and keep the local economy moving.

Since early last year the Canadian ‘housing bubble’ has been talked up a treat, with the market said to be over-inflated and on the verge of collapse at any moment.

But insiders say although demand has started to fizzle in recent times, putting the brakes on pricing, no overly dramatic plunges have occurred.

A different kettle of fish

Irrespective of what the future holds for any overseas ‘property bubble’, Australian real estate works in its own unique way, with various ‘standard’ and unique cultural fundamentals interplaying in various ways.

Comparing ours with another’s is like comparing apples and oranges.

These are unprecedented times for Australian real estate, there’s no doubt about it. But our comparatively juvenile society has lived through an incredible amount of transitions and shifts, weathering many global storms relatively unscathed as a young, evolving economy.

How well we continue to fare is of course anyone’s guess, but the fact remains, we all need somewhere to live. And until that changes, I don’t think we should spend too much time questioning the stability of bricks and mortar as an investment vehicle.