Many suggest the Harbour City is quickly becoming encased in its very own housing bubble, just waiting to implode if and when the current low interest rate environment takes a turn.

But is it reasonable to isolate and vilify the short-term growth experienced in certain postcodes within New South Wales’ property market?

Or should we take off the hyped up bubble blinkers and assess the current level of buyer competition and rising prices from a better balanced perspective, considering more than just data sets produced yesterday?

Headlines proclaiming the Sydney market to be experiencing an unsustainable rate of growth are somewhat understandable when you look at recent median dwelling figures and auction clearance rates.

According to CoreLogic RP Data’s March Home Value Index, Sydney home values rose by 3 per cent for March, reflecting a 5.8 per cent increase in overall dwelling values (units and houses) for the first quarter of 2015, and an impressive 13.9 per cent over the past 12 months.

A run of record-breaking weekends across Sydney’s fiercely competitive auction circuit has done little to quell nervous nellies’ fears either.

By the end of March, clearance rates were said to be going ‘bananas’ as they crept up toward an unprecedented 85 per cent.

Then two weeks into April, we watched as 87 per cent of the 533 properties that went under the hammer across Greater Sydney were snapped up by bidders, seemingly unfazed by suggestions that values are dangerously over inflated.

Take a deep breath and pause for reflection…

Admittedly this flurry of activity cannot continue unchecked, particularly when you consider the much slower current rate of income growth, which is at roughly one-third the level of dwelling growth across pockets of the Sydney property market.

However, we must be mindful that Sydney’s residential real estate sector did a bit of a Sleeping Beauty for much of last decade, with a period of relative inactivity between March 2003 and 2009.

In fact, when you consider the average annual rate of growth in dwelling values over the past ten years, Sydney hasn’t been very exciting at all.

As demonstrated by the below table, Melbourne, Perth and even Darwin all managed to outperform the NSW capital, suggesting that we’re currently witnessing a period of much needed catch up. 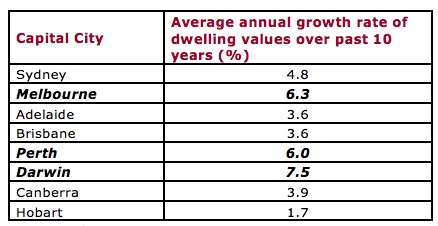 Yes, there are most undeniably areas that continue to outperform the averages within inner city Sydney.

But this is such a distinctly unique city with so many extremes – from multi million dollar Bondi mansions, to cheaper high rise apartment stock in traditionally less ‘desirable’ enclaves – that it’s virtually impossible to look at this sector as one entity and draw any hard-line conclusions about whether it is in fact, ‘overheated’.

Reserve Bank in line of fire

Finger pointing is a popular pastime in property circles and it seems the Reserve Bank is not immune, copping criticism for its role in continuing to keep interest rates at record lows.

Critics suggest this is creating the kind of accommodative monetary policy that gets property investors revved up and ready to go in Sydney’s hotly competitive market.

Some commentators have accused the banking regulator of consciously creating a property bubble, in order to resuscitate deflated business and consumer confidence, as well as the unfavourable employment data that’s prevented them from going anywhere with interest rates but down or sideways, for close to two years now.

Is it really logical to expect the RBA to move interest rates up based on one of the many housing markets within Australia though?

Not to mention the fact that a slight upward adjustment is unlikely to have enough of an impact to put the brakes on Sydney’s so-called runaway train entirely.

Yes, Sydney has given us a lot of food for thought when it comes to affordability and property prices in a country that’s seemingly retained its love for all things real estate, even in the wake of alarmist commentary.

But when it comes to smart property investment, it’s all about the long term. As such, property investors would do well to avoid buying into short term, reactionary reporting and maintain a big picture perspective.