Unless you’ve just crawled out of a cryogenically induced hundred-year hibernation, you know that real estate in Sydney, Australia is EXPENSIVE!

C’mon guys…just get off your behind and find a job that pays better, so you can save the necessary 20% deposit for a humble home in the inner Sydney suburbs. A cool $200k (plus costs) cash deposit will buy you a nice hefty mortgage of $800,000 in the Harbour City, with a modest dwelling attached to it of course.

And while that might seem like a substantial thirty-year commitment, you have to understand, with median house prices trending close to the $1 million mark; all of us Sydney property owners are suffering a bit of mortgage stress right now. Suck it up buttercup!

All jokes aside however, it’s getting to the stage where most experts who don’t have a barrow to push agree that trying to deny we have all the makings of a big fat housing bubble developing not just locally, but at a global level, is becoming a little laughable.

So from a ‘heads out of the sand’ perspective, the question is; what are the implications for property here in the Land Down Under?

Not just as essential accommodation for the masses, but also as a commodity keeping the economic cogs in motion?

It’s difficult to say where the latest round of housing bubble hubbub will lead with any certainty, with so much ambiguity surrounding global economic markets in general at this point in time.

But one thing is clear; it would be political suicide for the governments of developed and emerging nations (like China), where alleged housing bubbles have been identified, to allow real estate values to decrease significantly and suddenly.

While letting a bit of air out of some particularly over-inflated sectors probably wouldn’t hurt much (and would be welcomed by industry regulators running out of room to move on interest rates), a rapid deceleration of activity and in turn, double digit price reductions (as forecast by some commentators), would surely cause economic and social bloodshed.

To keep Aussie housing markets bobbing along nicely; without drowning in a tsunami of unchecked investor activity or over-correcting due to chronic accommodation shortages, the way planning policy is governed at all levels will have to evolve.

Because ultimately, it’s the unavoidable imbalance in the supply and demand equation that determines the price of any commodity (and housing is no exception) at any given time.

Median prices in Australia are currently tracking at $660,000 for houses and $517,929 for ‘other dwellings’ (apartments, units, townhouses, etc).

But with median house prices in Sydney sitting at $929,842 and $615,547 for ‘other dwellings’, it would seem there’s a glaringly obvious imbalance occurring in the Harbour City right now, with demand for affordable accommodation far exceeding availability.

And given the New South Wales government has forecast population growth of 100,500 people on average each year to 2031 for the city, logically there’s a pressing need for more housing.

Amending legislation to make the process of granny flat construction across all Sydney municipalities more palatable is one strategy recently adopted with seeming success. But a lot more ‘out of the box’ thinking will no doubt be required to solve this issue in the long term.

Particularly when you consider that what’s really lacking in the Harbour City is affordable accommodation.

The housing barriers go up

Australia’s property market is increasingly reflecting a tale of two social classes – the homeowners and those who would like to own a home, but just don’t have the financial capacity to do so (they need that better paying job Joe was talking about!).

This will no doubt create more dilemmas for development planning agendas, as governments need to be mindful of erecting further geographic barriers between affluent and affordable postcodes, thereby expanding Australia’s already emerging ‘under-classes’.

New planning policy and urban design will also have to account for the various cultural and demographic shifts currently occurring, as our nation evolves alongside a new economic superpower in China.

Suggesting that Australia’s alleged housing affordability crises can be corrected by simply building more houses is about as rational as Pauline Hanson’s idea to print more money.

Because beyond all the noise about property prices is the question as to whether our current ‘affordability imbalance’ is really just about supply and demand? Or is it more about a tilting of the traditional owner-occupier and investor ratio?

As less young people manage to realise the ‘Great Australian Dream’, more equity-laden boomer and Gen X investors are ramping up their property portfolios in a climate of cheap credit.

So how is this particular market swing, from housing as an emotional investment to an economic one, going to impact our property markets over the next ten to twenty years and beyond?

Traditionally, one of the things that’s underpinned house prices in our country has been a higher rate of home ownership, and our collective aspiration to secure a piece of this wide brown land.

But that’s all changing as we increasingly prioritise work, lifestyle and commutability over the suburban family idyll.

More young Aussies are happily settling in and around our major city centres as long term tenants, willing to forego a mortgage in favour of better (and cheaper) access to employment, infrastructure and entertainment in popular inner urban neighbourhoods.

This trend will no doubt continue, causing further modifications to the supply/demand equation and subsequent market imbalances.

The RBA’s May 2015 monetary policy pointed out the supply and demand challenges Australia is currently facing, referencing data from Charter Keck Kramer and the National Land Survey Program to demonstrate disparities between the strength of purchaser demand and scarcity of developable land supply in capital city greenfield land markets. 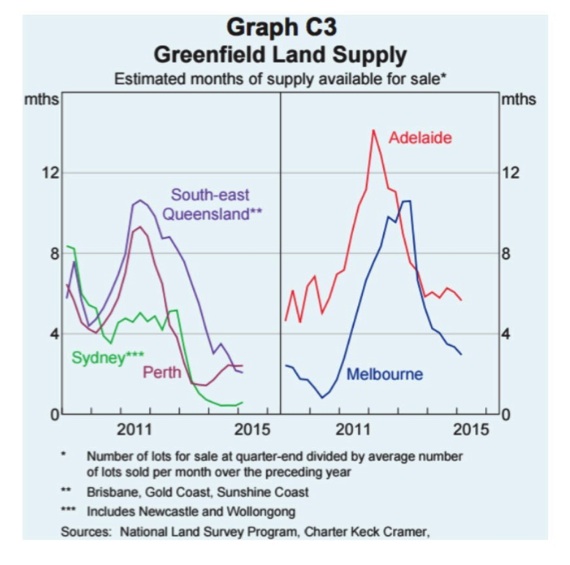 With investor driven lending accounting for around half of all market activity over the last six to twelve months however, it’s fair to surmise that much of the demand we’re seeing in certain sectors is from existing property owners looking to expand their portfolios, rather than first timers trying to get a foot up the property ladder.

It might be difficult to conceive of an entirely different ‘Great Australian Dream’ than the one most of us (and the generations who came before) grew up with. But as housing becomes less about the emotional aspiration of home ownership and more about lining the retirement coffers with property assets, this is the new reality.

For those who already own property assets and have equity at hand, it will be a lot easier to continue dipping your feet in the housing market waters, but arguably more challenging for those looking to buy a home.

Again though, the government can’t allow the wheels to fall off in any significant way, and will do all it can to keep stimulating the Australian housing sector. So before prices become too prohibitive, it’s likely that we’ll start to see more favourable homebuyer incentives, including early access to Super for that all-important deposit.

Investing rarely presents us with a ‘sure thing’, as every commodity has a degree of associated risk. But at this point, the federal government will do everything in its power to keep the momentum going around real estate for as long as possible.