Made in Australia – Why the Chinese love our home grown housing

Don’t you just love how Australia’s property markets keep delivering up one interesting newly set precedent after another of late?

And of course, let’s not forget one of mainstream media’s favourite whipping boys – unprecedented housing affordability issues and the alleged catalysts for ‘inflated values’, including foreign investment activity.

In 2014, the RBA made a written submission to the House of Representatives Economics Committee Inquiry into Foreign Investment in Residential Real Estate.

The report essentially claims that despite much of the alarmist commentary around foreign investment, property acquisitions by overseas investors remain relatively low as a share of housing turnover (both value and volume).

Acknowledging issues around incomplete transaction data, the RBA submission states, “For much of the past decade or so approvals for foreign investment in the residential sector have remained around 5 to 10 per cent of the value of dwelling turnover in Australia, and perhaps half that share of the total number of dwellings turned over.”

The submission suggests this is in keeping with past trends around foreign investment levels and adds that foreign purchases appear to be most concentrated in niche market sectors, including:

No prizes for guessing where off the plan developers are largely pedalling their wares right now.

According to the RBA, “On balance, foreign residential demand has probably resulted in an increase in the supply of dwellings in Australia by more than would otherwise have been the case, and hence stimulated construction activity.”

An initial glance at the below graphs presented by the RBA in their parliamentary submission, shows a clear spike in approvals for new dwelling purchases made through the Foreign Investment Review Board (FIRB) during the first three quarters of 2013/14, when the value of total foreign approvals as a share of dwelling turnover increased to 12 per cent.

“However, with national dwelling prices and turnover having increased significantly over the past 20 years the value of foreign residential approvals as a share of total dwelling turnover in Australia has not increased over time,” the RBA states.

The next graph clearly demonstrates that the majority of foreign investors favour Sydney and Melbourne property, with investment in dwellings across Victoria and NSW accounting for almost 40 per cent of the total value of foreign residential investment approvals in 2012/13. 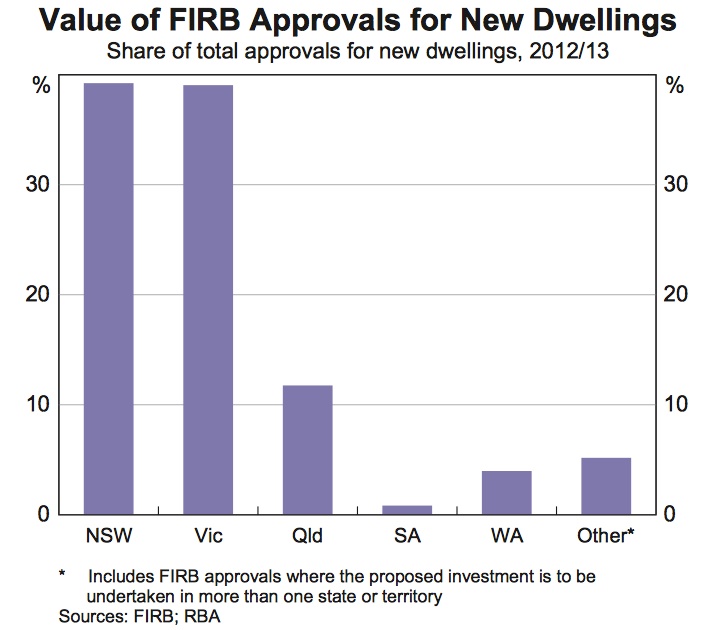 “Bank liaison with industry participants suggests that much of this investment has been for the purchase of higher-density dwellings located in inner-city areas of Sydney and Melbourne, as foreign buyers and temporary residents typically prefer dwellings close to the CBDs, major universities and public transport infrastructure,” the RBA observes.

First came the insatiable Asian appetite for all things beneath our dirt (that’s girt by sea) with the resources boom. Now as real estate does all the heavy economic lifting, it seems our Asian neighbours also like what they see on top of Aussie soil.

Updated figures around foreign purchases released by Credit Suisse in May this year, revealed the total value of Chinese residential property purchases was $8.7 billion in the 2013/14 financial year, representing an estimated 15 per cent of all new home sales for the period.

Not surprisingly, Credit Suisse data suggests that 23 per cent of new homes sold to foreign investors were located in Sydney and 20 per cent in Melbourne.

The international banking giant predicts that these numbers will grow significantly, with Chinese buyers expected to snap up a staggering $60 billion worth of property here in the Lucky Country over the next six years; more than double the $28 billion spent in the six years to 2013/14.

Why the obsession with Aussie property investments?

Using data supplied by CoreLogic and Bloomberg, IG Market’s chief market strategist Chris Weston demonstrates in the below graphs how Sydney’s house prices have been trending from a local buyer perspective, as opposed to that of a Chinese investor over the past three years.

As you can see, while prices have surged in Australian dollars, thanks to our currency’s depreciation against the Chinese Yuan prices have gone nowhere fast for Chinese buyers.

The same chart for Melbourne demonstrates how prices have actually fallen for offshore Chinese investors.

In other words, what might look expensive to local buyers (particularly first timers trying to get their foot in the proverbial housing market door) actually appears very affordable to a large throng of cashed up Asian investors.

“If we look at property prices then in AUD terms one can clearly see the rampant trend higher since late 2012, which supports the arguments of those who believe markets like Sydney have ‘bubble’ like qualities,” says Weston.

“However, when adjusting price into Chinese Yuan and looking at the adjusted prices through the eyes of an unhedged investor you can see that things don’t look so frothy”.

Yet again, it seems Australia’s unprecedented ‘housing affordability’ debate comes down to one crucial factor – perspective. What might be one homebuyer’s unattainable ‘Great Australian Dream’ is another’s very affordable (and irresistible) investment opportunity.