You know the so-called housing affordability debate (more like debacle) has got completely out of hand when overly privileged politicians start weighing in, with the pretence of understanding what it’s like to be a would be first home buyer these days.

The hype surrounding Australia’s property markets is quickly turning to hysteria, as even seemingly sensible commentators become caught up in a media maelstrom intended to do little more than sell newspapers.

Headlines proclaiming the demise of the Great Australian Dream and vilifying negative gearing for robbing younger generations of a home ownership utopia are provocative enough to get folks talking around the water cooler, but whatever happened to journalistic integrity?

Where is the balanced evaluation of ALL the facts and figures?

Reason flies in the face of fear

Much of the noise currently surrounding housing is rooted in fear. Young people hoping to acquire their own home one day should be the most terrified, with the implication that you’ll be locked out of the housing sector entirely as prices become increasingly unaffordable.

But the problem is, where fear goes, reason and logic gets left behind.

Those of us who work in the property and finance sector, with the facts at hand, know that while certain highly sought after postcodes are outgunning the averages, there’s no one housing market in Australia and not all properties are outperforming.

All we’re hearing about though is Sydney, Sydney, and more Sydney, which isn’t at all surprising given this is the home of Australia’s media machine and as such, where a large portion of the press invests its time and energy.

But what of the other markets around the country, and should Sydney homebuyers really be scared out of the race entirely?

The catalyst for APRA’s decision to introduce groundbreaking macroprudential constraints on the banking sector has arguably been the constant talk of housing bubbles and over-inflated values here in Australia.

But is it possible that these semi-official steps have been taken on the back of a somewhat skewed perspective, based on that one proverbial fly in the ointment – Sydney?

It’s understandably difficult to swallow the imposition of lending restrictions to slow market activity for borrowers in the likes of Brisbane and Perth for instance, where median house prices are actually sliding backwards (down by 1.5 per cent and 2.7 per cent respectively).

Likewise in Darwin, where vacancy rates are trending high, rental yields have decreased by an average 5 per cent in the past year and the median apartment price has dropped by 4 per cent.

Not to mention here in Canberra, just a few hours down the road from all the fuss, where house prices recorded just 0.7 per cent growth while other dwellings have slipped by 2.5 per cent.

A spot of sanity

Industry commentator Terry Ryder attempted to lend some much needed sanity to the prevailing hysteria surrounding Australia’s property markets recently, noting in a Property Observer article that median prices are not necessarily a reliable yardstick for affordability.

He says the current median price for a dwelling in Sydney of $752,000, actually reflects the fact that half of all houses in the area are selling for less than this figure.

“The (number one) most popular suburb in Sydney for buyers of dwellings is Blacktown (the suburb) – close to 1,000 home changed hands there in the past 12 months, at a median price of $385,000 for apartments and $535,000 for houses (which means half of all sales were lower than those figures),” explains Ryder.

“There are hundreds of similar examples across the Sydney metropolitan area.”

As for the incessant negativity surrounding negative gearing, and a recent claim from The Greens that abolishing the investment tax perk would net the government an extra $42 billion in revenue over 10 years, Ryder says the arguments are irrational.

In the first instance, the implications of scrapping negative gearing and discouraging real estate investment would be dire for state and federal coffers that rely heavily on funding from stamp duty as well as capital gains and land taxes.

Then of course there’s the potential (social and economic) impact on the private rental market, particularly for those who cannot yet afford a home of their own.

As for the image some social commentators and political parties like the Greens have painted of negative gearing; as a Robin Hood type tax that sees rich, asset laden investors virtually rob low income taxpayers, Ryder says this is “simply dishonest”.

He says three quarters of property investors are earning an average wage and own one property in addition to their own home.

“Most of them believe that investing for their retirement is doing the right thing by the nation. In condemning them with this poorly-considered and downright deceitful announcement, the Greens are making a serious error of judgment.”

So where are we now?

Boom? Bust? Bubble about to burst? Among all the mixed messages, what and who should we believe when it comes to how Australia’s property markets are currently placed?

While the nature of real estate and its reliance on human psychology as a value driver means it’s nigh on impossible to predict with any real certainty where the markets are positioned at any given time, Herron Todd White recently made the effort to do so, with this version of the National Property Clock. 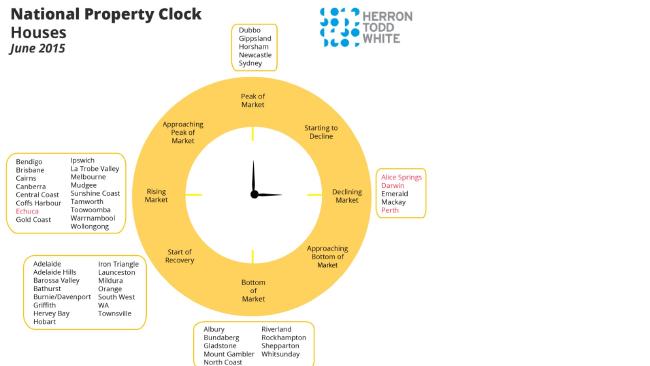 Should this prove to be accurate (as only time will tell), I fear we can expect much of the hype surrounding Sydney real estate to continue for some time.

No doubt the media will find plenty to crow about as the city hits its apparent peak and has nowhere to go but down (or sideways if you don’t want to be alarmist), reminding us just how fickle the nature of property and finance reporting can be.

The Trilogy team can help you ignore the distractions and stay focused on your property investment goals and strategy. To connect with us and learn more about how we can help you to actively grow your portfolio, simply click here now.